Is Your Herd Really “Closed”?

Maintaining a closed beef herd is a task that few beef producers care to undertake, yet it can have benefits from a herd health and biosecurity standpoint.

To be sure, most diseases enter herds through direct transmission from other cattle. With this possibility eliminated in closed-herd situations (via eliminating fence line contact with other herds, maintaining a sufficiently large genetic base to minimize negative effects of excessive inbreeding, or relying solely on artificial insemination as a means of getting breeding females pregnant), some producers go as far as to eliminate vaccinating cattle altogether.

However, even the best efforts to not bring any new animals into a herd can be negated by one neighbor’s bull jumping a fence. In these cases, having naïve, unvaccinated animals can set up a playground for disease-causing agents to flourish. Even if no cattle are present in the immediate area, other possible vectors of disease transmission may exist. 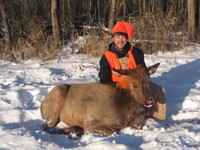 In 2009, I was fortunate enough to draw a once-in-a-lifetime elk tag for a free-ranging herd in northwestern Minnesota. The picture that entered my mind when I thought of elk hunting was a long-range passing shot either in a mountain valley or on one of the slopes. I grew up not very far from where this herd of elk called home, though, and this area certainly had no mountains in the immediate vicinity.

One benefit I did have in this adventure was good snow cover, and I soon found that following tracks in fresh snow through dense poplar stands and willow swamps was a productive method of hunting.

This herd of elk also happened to be in the area of Minnesota that had bovine tuberculosis in cattle and whitetail deer. As a result, all hunters were asked to call personnel from the Minnesota Department of Natural Resources upon a successful hunt so they could take a host of samples.

Sections of lung, liver, blood samples, fecal samples and lymph nodes all were removed from the yearling female I harvested and shipped to researchers for evaluation. At the time, collecting the samples made sense, but the fact that they were taken soon slipped my mind. The immediate task at hand was to ensure the appropriate processing of the bounty of fresh elk I had before me.

Months after the elk was in the freezer and most of it was consumed, I received a letter in the mail with the sample results from the elk I shot, along with a summary report of all the elk harvested from the area. As I read through the results, I was very intrigued by the fact that many of the elk evaluated had been exposed to, among other things, viral and bacterial diseases that are commonly vaccinated against in our cattle herds. A brief summary of the findings (Adapted from Hildebrand et al., 2010) included:

Another report summarized the potential for deer species to serve as a source of infection for livestock and humans. In addition to the diseases mentioned above, deer species in the U.S. have been found with tuberculosis, cryptosporidium, chronic wasting disease, salmonella, brucellosis and bluetongue virus (See Böhm et al., 2007, for full report).

Incidence of actual disease in deer varies and can be very regional. This list was meant to stimulate thought on what impacts a group of deer could have on your operation.

You know what the deer situation is like on your individual operations. In some places, the deer wake up when the tractor starts and have a race with cattle to see who can get to the feed bunks first. Others prefer to sneak into the hay stacks and silage piles around dawn and dusk, or maybe just visit the salt blocks and waterers after the cattle walk away.

Deer know far fewer boundaries than our cattle and may alternate between your feed pile and the neighbors’ feed piles. With this in mind, I asked myself the question: How “closed” is a closed herd?

Although disease transmission risk is lower with closed herds, it is not eliminated. Speak with your veterinarian about a vaccination program that is appropriate for your situation.